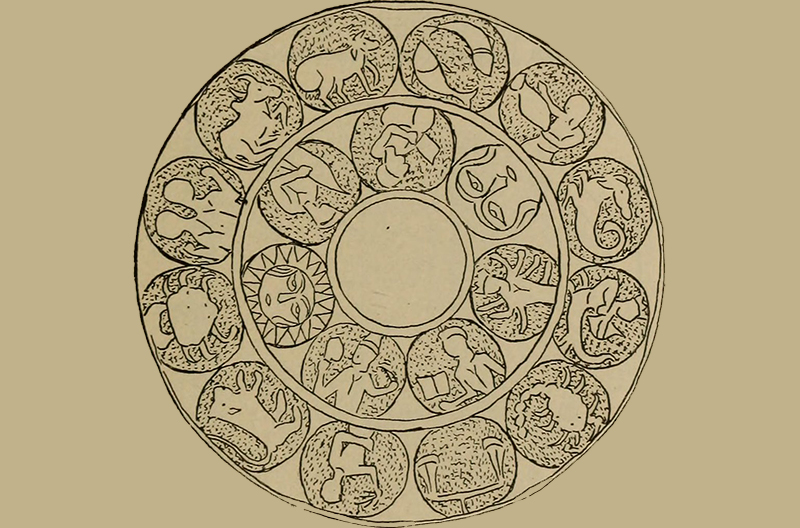 Most modern popular writers on Feng Shui avoid using this term “geomancy”, although it is still widely applied to Feng Shui practices by academic writers.

Geomancy is in fact a divinatory technique in its own right. The term was appropriated by 19th century Western commentators in translate Chinese terms such as dili and kanyu, which were then more commonly used than Feng Shui. Interestingly, the term, “geomancy” was itself originally coined because if the difficulty of translating the Arab name for the divination technique known as khan al-rami or “elegant marks in the sand”. Whilst distinct techniques, geomantic, divination may share a common historical origin Feng Shui.

Geomancy is one of the most widespread divination systems in the world. Originating in the Middle East, it travelled along Arab trade routes not only to Europe but to the island of Madagascar and to West Africa where it became part of the indigenous religious practice. With African slaves, geomancy crossed to the New World where it is still part of the Santeria cult.

Today, geomancy is virtually a lost art in the West. But from the 12th to the 17th centuries geomancy was second in importance only to astrology, a status reflected in the description of geomancy as the ‘daughter of astrology’. Almost all the famous astrologers and occultists of this period were familiar with geomancy.

England itself has a long and rich geomantic tradition. The British Library holds beautifully illuminated geomancies made for King Richard II, the Duke of Gloucester and other wealthy and influential patrons from the medieval. My own ancestor, the Elizabethan magician Simon Forman, used geomancy extensively in his practice. The 17th century esoteric philosopher Robert Fludd devoted much of his work to geomancy, recounting his brush with the Inquisition at Avignon as a result of geomantic interests. He was saved by the Papal envoy who was himself an expert geomancer. And the royalist John Heydon was first imprisoned for geomantically predicting the death of Oliver Cromwell, escaping with his life only because his forecast proved accurate, and again later for publishing a geomantic chart of the life of Charles II.

Traditionally, geomancy is under the control of Earth elementals. Like the I Ching, the Tarot or any other divination system, it is simply a means of communicating with the unconscious mind. This is how the 17th century geomancer Robert Fludd understood geomancy to work. He describes the making of the marks upon which the geomantic chart is based in words which are today used to explain the movements made by the pendulum or divining rods used in dowsing.

And like the I Ching, geomancy responds to directly posed questions. The question is held in the mind whilst marks which generate the geomantic figures are made. Originally, these marks were· made in sand or earth. This is why the technique is called geo-mantiae, or ‘divination of earth’. Its alternative title, the Ars Punctatoria, the art of points or punctures, is probably a more accurate description of the modem technique.

By the medieval period, pen and ink were used to make random lines of points which were counted off in pairs until only an odd or even number remainder. It is these remainders, like the fall of three I Ching coins, create the four primary geomantic figures or ‘mothers’.

The four ‘mother’ figures generate four secondary ‘daughters’. From combinations of pairs of mothers and pairs of daughters, a third set of figures is created called ‘nephews’. The ‘nephews’, combined in pairs, generate two ‘witnesses’. The geomantic chart is completed by the combination of the ‘witnesses’ to form the ‘judge’.

Since medieval times a more detailed interpretation has been obtained by assigning the mothers, daughters and nephews to the 12 houses of the astrological horoscope. The favourableness of the figures and the relationships between them form the basis of a detailed reading of the geomantic chart.

Geomancy was an oriental divination method introduced into Europe through Moorish Spain. Its origins are as shrouded in myth as those of the I Ching. According to legend. the Archangel Gabriel gave the secret to Idris, the Arab name of Hennes, who passed the art to Tumtum al­Hindi, linking geomancy with India.

My own research suggests that geomancy was probably influenced by Chinese divination techniques based, like fengshui, on the I Ching.

A number of early Arab works on geomancy are attributed to Ja’far al-Sadiq ( c.696-765), the founder of the Ismaili sect and the teacher of the famous alchemist Jabir lbn Hayyan ( c. 720-81 SCE), known as Geber in Europe. Jabir’s most important contribution to alchemical thinking was the Sulphur-Mercury theory which held that all metals were composed of varying proportions of sulphur and mercury. Alchemists hoped that by altering the proportions of these two ‘elements’ they could convert base metals into gold.

It is now widely accepted that Jabir’s Sulphur-Mercury theory was derived from Chinese alchemical traditions. The polarity of the hot. fiery sulphur and the cool, aqueous mercury strongly resembles the Yang/Yin theories upon, which Chinese alchemy, and indeed fengshui. are based. Mercuric sulphide, or cinnabar, was the most important raw material in Chinese alchemy. Several alchemists and even a couple of Chinese emperors lost their lives rather than gaining immortality by ingesting this poisonous substance.

We know that during the 8th century the Chinese imperial court was fascinated by alchemy, and that there were not only strong trade links between China and the Near East. but that ideas as well as precious silks traversed the ancient Silk Road.

Alchemy. both East and West. veiled its secrets in allegory.

In China the trigrams and hexagrams of the l Ching and the numerology of the Loshu were used to describe the alchemical process in a similar way to their use in the Flying Star school of fcngshui. In the West. colours were used to indicate important stages in the transmutation of base metals; sulphur was described as the Red Stone and mercury as the White Stone.

Among the 16 figures of geomancy are two named Rubeus or Red. and Albus or White. Many of the other figures’ divinatory significance can be understood either from their names or structures, Rubeus and Albus are more difficult to explain. Rubeus represents the violent energy of Mars in Scorpio and Albus the purity of Mercury in Gemini, reflecting the polarity of the male and female. Yang and Yin. and of course- sulphur and mercury.

The appearance of Rubeus and Albus among the 16 geomantic figures would very strongly suggest that geomancy is closely related to Jabir’s Sulphur-Mercury theory and the lsmaili tradition founded by his teacher. Ja’far. to whom Islamic tradition attributes early works on geomancy.

We know that they were influenced by Chinese alchemy which used I Ching trigran1s and the Loshu diagram. It therefore seems very probable that geomancy was itself influenced by these Chinese divinatory traditions. If geomancy was the Daughter of Astrology. it may well be the granddaughter of the I Ching.

Both geomancy and Feng Shui are applications of the cosmologies of their respective cultures. The traditional fengshui compass includes the 8 trigrams. the five Chinese elements, the 12 Heavenly Steins and the IO Earthly Branches, the numerological ‘stars’ of the Loshu and the 28 lunar mansions amongst others aligned with the points of the compass.

The 16 geomantic figures were also thought to be earthly reflections of celestial influences. Each figures was associated with a direction of the compass. a planet, a zodiacal sign, one of the four Western elements as well as a season of the year. ln Arab and early medieval geomancy, the tetragrams were also correlated with the 28 lunar mansions. These symbolic attributes allowed the geomantic diviner to interpret the favourableness of the chart. If arranged in a circular form, these symbolic attributes would resemble the fengshui compass.

There is no direct historical evidence to suggest that geomancy was used to site buildings or arrange interiors as in Feng Shui. Geomancy was primarily a divination technique like the l Ching. From surviving records, however. it is clear that the geomantic oracle was used to locate missing objects or lost persons, discover buried ‘treasure’ and determine favourable directions.

The famous occultist Aleister Crowley recounted a story of a man who used geon1ancy to find mineral wealth in South Africa. From the geomantic chart, he estimated the most favourable direction to begin his search. He was looking for gold or diaruonds. At the point of giving up, he stun1bled upon an alkaline deposit. Unfortunately, the man did not stake his claim to the find and lost the opportunity of becoming very wealthy.

This and other stories indicate that geomancy, although an almost lost tradition, is still very much alive. Further research into its practical applications in the past may reveal even closer parallels with fengshui and a solution to the problem of ‘translating’ culturally-specifie Chinese Feng Shui practices into a modem, Western context.